Letter of the vigneron

aged 62 retired. I could now set up as a young farmer.

Thanks to financial aids and a bank loan, I was able to plant and buy new materials.

In 1990, the harvest was exceptional both quality and quantity.

We could now give up the rented fields in Andillac.

Although my father was retired he continued selling wine at the markets, as sales had expanded.

All the vines were destroyed. The day before, we had planted one 3.5 acres parcel of « len de l’el » vines.

It was very difficult both for the moral and for the treasury.

However, the following Spring, in May 1992, the bunches of grapes looked nice.

Unfortunately, it rained cats and dogs for three week from May 15th to June 10th. Mildew arrived.

The soil was so soggy that it was impossible to enter the vineyards with tractors. Three weeks later,

a helicopter was used for spraying. Its arrival coincided with the return of the sun.

At the end of the season, we had conducted twelve sprayings instead of six in the previous years.

The month of August and the first half of September were dry and we began to harves on September 19th.

In the evening, however, the sky was thundery and rainy. In less than an hour, 50 liters of water per m2 fell.

The following days, we could not enter the vines with the machines because the soils were so sodden.

Moreover, in Campagnac, the vineyards are very steep and it was too dangerous to harvest by machine.

The bunches of grapes began to rot and it continued to rain, again and again…

A courageous team picked 10 acres of grapes by hand in the rain. We worked liked slaves and said :

After reading these pages, you will understand that for a winegrower, wine is much more than just a drink.

There is a human endeavour, the fruit of the union between the Earth and Men and Women.

Please, great or little, have respect for WINE 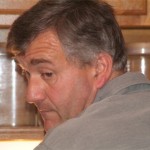 Dear Website’s readers, we will soon be writing the vigneron’s next letter.